​When is a Crosby fife not a Crosby?

Wait, what you are saying!

Didn’t George Cloos apprentice with Walter Crosby and continue making this style of instrument in honor of his master?

Aren’t the Cloos Crosby model fifes made exactly like the ones by Walter Crosby?

When George Cloos immigrated to the United States didn’t he seek out Walter Crosby to apprentice with because of his fame as a woodwind maker?

Stop buying into these fife myths that have been strung together over these many years and let’s start looking at facts.

Before we continue let me state this: When I started collecting fifes (I own over 325 fifes in my collection) it was stated that the fife made by Walter Crosby was very, very rare, so rare that very few had ever seen one. (Except for the 2 presentation Crosby fifes in the Dayton Miller Flute Collection)

Well it’s about 10 years later and I own 4, and have examined one owned by another collector and heard of 3 more in other collections.

10 Crosby fifes, made by Walter Crosby!

As stated before, I own over 325 fifes, and constantly buy everyone that I find. (That are of interest to me)

There are fifes by other makers in my collection that I only one example, and don’t know of any other examples, yet I poses 4 Crosby’s and know of 6 others.

Rare, not really, just not falling out of the trees.

What does 4 Crosby fifes give me?

It gives me the ability to measure and examine the instruments and make comparisons with other “Crosby” models, and that is what I intend to do here with the Crosby Model made by George Cloos!

To say that Crosby model fifes made by George Cloos of Brooklyn are the same as ones made by Walter Crosby of Boston is like saying that a wolf and a dog are the same thing. (You can Google difference between wolf and dog to find the answer.)  They are similar, but not the same.

Now that we understand that, let’s have a look at both fifes to find what is similar.

I have picked one fife of each maker to compare, one marked W. Crosby/Boston and the other marked “Crosby” GC, which is made by Gorge Cloos. (Some of the Cloos “Crosby” models do not have any Cloos stamp except for his trade mark “GC”. This will be covered in my essay on George Cloos.)

Let’s start with the similarities:

I could go on and on, but these are general items that could be present on many different fifes.

Here are what makes the fife made by Walter Crosby different than the one made by George Cloos:

Length:  Yes, length does matter, at least when doing a comparison of fifes!  The Crosby fife measures 17 3/8 inches where the Cloos fife measures 16 7/8 inches.  That is almost a half inch difference!  I have 2 other Bb Crosby fifes and they measure very close to the 17 3/8 mark.  If George Cloos was an apprentice to Crosby, and worked with Crosby, and wanted to make something to honor his “master” why is he making the fife shorter?

Bore: The bore is the inner measurement of the instrument.  The bore tells me more in comparing fifes as it is the measurement of the tool that was used to cut the hole. The bore on the Crosby is .413 whereas the bore on the Cloos “Crosby” model is .425.  In musical instrument acoustics, bore comes into play for sound and intonation.  Crosby works to put a fife closer in tune with better playing characteristics and you change it when you make the copy? BTW, there is a myth that Crosby fifes have a “Step” bore.  No, NO, NO!!!! I have personally examined 5 instruments using a bore scope (Google it) and have found this not true.  Unless something comes up in the future, I will have to put this myth to rest!

Ferrules: Both are made of, what we call, German Silver. (Google it) Both are tapered. The ones on the Crosby are 1.62 inches whereas with ones on the Cloos “Crosby” model are 1.93 inches.   Not close, so no cigar!  The ones on the Crosby are seamed and the ones on are Cloos are not. (I do not intend to discuss that Cloos seamless ferrules here, but will do so in another essay) The Crosby ferrules are scored with 2 sets of lines, top and bottom of the ferrule, with the pattern 2+2.  The Cloos ferrules are marked with, what we call, knurling, and has only one line of knurling, top and bottom.  The taper of the ferrules are also different, the Crosby going from .54 to .65 where the Cloos goes from .59 to .69.  In general, the ferrules on the Crosby are smaller and have more of a taper. (BTW, Tapered ferrules were being done WAY before Crosby came along.  William Callender, as an example, was using a tapered ferrule in the 1820’s)

Taper: While the high point on both of these are in similar points and the width of each fife being similar, (Crosby .79, Cloos .80) the taper is very different.  The Crosby tapers down from the high point of .79 to .66 top, .63 bottom while the Cloos tapers from a high point of .80 down to .70 top and .69 bottom.  Thus you can see that the Crosby has more of a taper at both ends than the Cloos does.

Wood: In this study the fifes are made of different woods, Rosewood for the Crosby, Black Ebony for the Cloos.

Finger holes: Here is where things really get interesting!  The finger pattern for the Crosby is different than that of the Cloos!  What! How can this be?  Cloos studied with Crosby, didn’t he? (Nope, another subject for another essay) If we examine Crosby fifes we find that Crosby sticks to the same bore with the same finger pattern, small, larger, large, large, largest, large, or in measured terms: .23, .28, .28, .28, .34, .28.  What Crosby has done is he changed the first hole to smaller and the fifth hole to larger.  THIS IS THE “CROSBY” PATTERN OF FINGER HOLES!!!!! Now what does Cloos do, at least on his Bb fifes?  Cloos finger hole pattern is as follows: Small, large, large, small, large, small, or measured: .21, .26, .26, .21, .26, .21.  So with the Cloos, the 1st and 4th and 6th are the same, the 2nd and 3rd are the same.  Not what I would call the “Crosby” pattern!

Ferrule attachment:  Cloos: Cloos uses, on this fife, 2 punch marks to keep the ferrule in place. A punch is a small, nail looking, for a better term, piece of metal that you strike with a hammer to indent something.  With some Cloos fifes, I have noticed some of the ferrules being held on with a type of glue, thus many times, after many years, they will come off.  I am sure they started using the punch to get them to stay on better, but even with that, one is able to pull a ferrule off and many times find rolled up paper used to help tighten the ferrule and keep it in place. This is not the case with Crosby!  It took me some time to find out what Crosby was doing, but find out I did!  After looking for many hours at the ferrules of a Crosby fife I was under the impression that he used some type of glue to keep them in place, but I kept coming back to a tiny, tiny circle appearing on both ferrules.  The circle was so tiny I had to use a magnifying glass to really look at it.  Finally I took my bore scope and had a look inside at the place where this circle was.  Turns out that the circle was a plug in which Crosby fitted the ferrule on the fife, drilled a hole, then inserted a nickel plug to match the ferrule and filed it smooth.  This is the case with all my Crosby fifes, and is also the reason I couldn’t move any of the ferrules, they were on that good!  This shows that Crosby was a very methodical maker who took pride in his work and spent a lot of extra time on the small things.  Not to say Cloos didn’t take pride in his work, but do you think he did honor to his “master” by slapping a ferrule on and hitting it with a punch?

As you can see from the facts, the Crosby fife made by Walter Crosby of Boston and the “Crosby” model fife made by George Cloos of Brooklyn NY are really 2 different animals.  Walter Crosby was building one piece at a time while Cloos was building 100’s at a time.  Nothing is wrong with both men’s method of business, and it was by using the Crosby name and basic design, George Cloos helped the Crosby name live on.  But with that said, it’s like ordering a “Coke” and they give you Pepsi.  Same thing, but different. Unfortunately somehow the “fife myths” became part of the story somewhere along the line.

So to restate what I stated in the beginning:

When is a Crosby fife not a Crosby?

When it’s a Cloos!

(Note: I will be dealing with Cloos and Crosby histories in other essays) 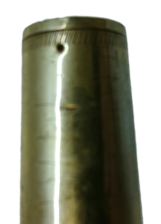 4 Fifes made by Walter Crosby