When is a fife marked Geo. Cloos (or any marking of Cloos/GC/GC Crosby/etc…) a Civil War Fife?

How can this be?

Didn’t George Cloos make 1000’s of fifes for the Union Army during the Civil War?

Wasn’t the Cloos Company founded in 1862, thus showing they were in business at that time?

I will be dealing with the Cloos/Crosby model fife in another essay, but not here.

When I started my research regarding George Cloos I found much misinformation that has been passed down over the years.  Some from people who had nothing to do with the company, some from the company itself, but I knew that there must be a trail that I could follow and determine if Cloos did indeed supply fifes for the Union Army from “large government contracts” awarded to his firm.

Let’s start the journey by having a look when the Cloos (if that’s what we want to call them) family arrived here in the United States:

1855 Goturd Lewis (Brother. How they got Lewis, I’ll never know but the birth date was consistent, and he was living near William Bauer, a person I will deal with in another essay.)/ 1855 NY Census

1867 No listing for George/Brother is listed as Closs

So, to break this information down into a simple format:

1860 Both brothers sign their names Closs on their citizenship papers.

Now to total the findings:

What does all this tell us?

It tells us that the Cloos brothers were not starting to use the name Cloos until toward the 1870’s, thus any fife made at that time would not have been marked Cloos!

It seems that they were mainly using the name Closs and even used that to become citizens. 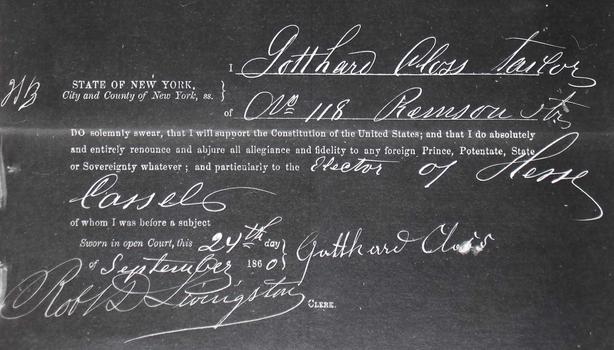 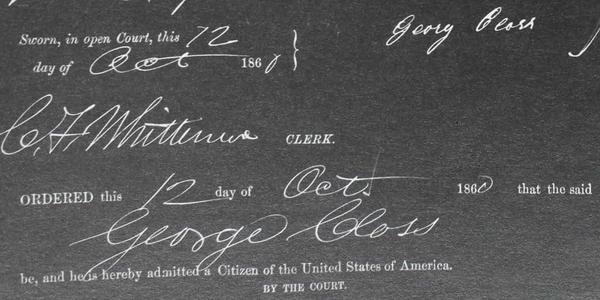 Why they would have changed their name?

I have no idea at this time, but I am confident to state that no instrument marked Cloos came from this period.

Didn’t they make fifes for the Union Army?

How do I know this?

Because Cloos tells us from a statement in 1884 in the “History of Kings County” that his business stated in 1865. 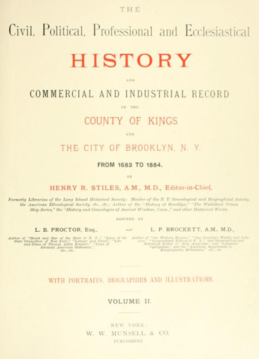 I will give myself as an example of how this might have happened:

I state that Dillon Music started in 1992, but I was sending out mailing lists of instruments as early as 1987.  Furthermore, my “first” deal really could be traced to 8th grade when I traded 2 clarinets for a Sousaphone and then traded the Sousaphone for another Sousaphone and a helicon.  That would put the start of my business somewhere in the mid 70’s.  Depending on which date I use I could increase the age of my business by almost 17 years.

The same could be said for George Cloos.

It also could be that as the century wore on he wanted to identify with the Civil War, and thus felt it better to use the earlier date as the start of his business. This would be a good business move if you wanted to sell fifes to many of the Civil War fife and drum groups.

As with myself, Cloos could have been dealing/making in a small manner while working for someone else, and thus at a later point in his life decided to change the date to then.

I will be addressing this matter in another essay, but for now this is my conclusion, based on the facts, regarding the George Cloos Company and the 1862 date:

So, if you have any fife marked Geo Cloos/Crosby GC/Cloos, or any other marking as such, sorry, you DO NOT have a Civil War instrument!

Or to restate the opening:

When is a fife made by George Cloos a Civil War fife?