What did the English use?

What did the Americans use?

Why do I ask these questions?

Because it seems there is confusion as to what type of fife was used during the American Revolution and what it looked like, and there seems to be many legends and myths that have sprung up around this seemingly simple topic.

Well I am here to help in understanding by showing what the English and what the American might have used by stating examples of instruments of the period.

Here is what we know:

By the American Revolution the English were quite adept at making woodwinds.  There are many makers in London who had been in business from the mid 1700’s and were still in business well past the war.

Here are a few names with the dates that they were in business just as an example:

And these are but a few.  There were many, many more small shops making woodwinds that flourished during 18th century England.

So, to give examples of English fifes from the time of the American Revolution is very easy.

If you have an English fife, with a maker that was in business during the period, you have a fife that would have, most likely, been around during the American Revolution.

Was it used in the Revolution?

No one knows, unless you have firm documentation.

There are some very distinct features of the English fifes, the most outstanding one is the diameter of the instrument.

The English fifes tend to be much larger in diameter than fifes of a later period made by the Americans or French.

The other distinction is the use of a few different sized holes in the 6 hole pattern.

The current myth about fifes is that the older fifes all conform to a finger hole pattern of all the holes being of the same diameter.

This is not true regarding most English fifes.

Most English fifes normally have the 1st and 6th hole smaller, thus using a pattern used by a woodwind maker of the day.

If your fife is unmarked you have a snowball's chance in hell to be able to connect it to the American Revolution.

But marks do wear off, so still be of hope.

If you have something, feel free to email me through our “Contact Us” page and I might be able to help.

After all, when you have a collection of over 325 fifes, some dating back to 1750, you see things that others don’t. 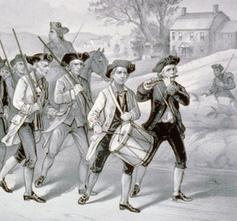 So, now that you understand that we had woodwind makers here, let’s list a few that were in business around  the time of the Revolution:

Some of the above names were immigrants that had settled here and might have worked as woodwind makers in the old country.

Some of them were born here and learned their trade here.

Two of these were very involved with the American Revolution and were intimately acquainted with many of the leading figures of the day.

These two would be:

*Note: I will be writing another essay on these 2, so I am not going to go into detail here about their connection.

Would William Callender have made a true Revolutionary War fife?

You can bet on it!

The only problem is that Callender was an inventor and a tinkerer who seemed to always look for a “better way”, thus his fifes can date from 3 different periods of his life, early, middle and late.

One fife does survive from his early period and gives us a good look at the American fife of the 18th century.

The fife resembles an English fife, but is different in this way.

It is a little smaller in diameter and the finger holes are all the same size.

I will be discussing this more in an essay on Callender, but for the sake of this essay it is fair to say that this style of instrument can be found for the Americans.

Now for the Americans it is a little harder, but not really.

Thus, with that being said, refer to above for English makers and guidance.

But that would not be so for all the fifes being used by the Americans.

America also had makers here who could produce woodwind instruments.  Some that emigrated here from England, Germany, etc…..and would have brought their woodwind making skills with them.

And we also had a thriving woodwind business, small, but going none the less.

The main difference was that many American woodwind makers also did other things.

Mostly they were turners.

What is a turner?

It is a person who turns wood, metal, ivory, etc…..and uses a lathe type of equipment to do the work.

An example of this would be Isaac Greenwood of Boston.

Greenwood runs this advertisement in 1768: 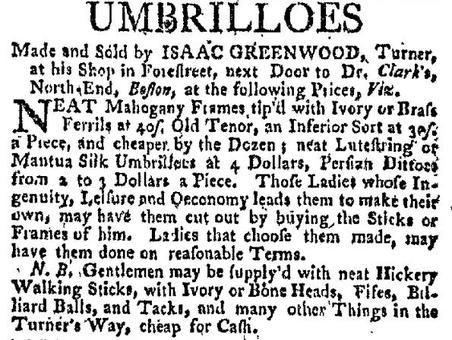