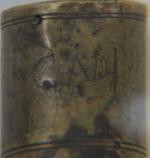 *Note: There is a rant on the internet regarding this instrument. I was the one who purchased it off Ebay and paid NO WHERE near the $14,800 asking price. This is indeed an instrument made during the mid-1700’s and is NOT a copy or counterfeit! One cannot make assumptions without examining an item in person!

“Stanesby Jun. In the Temple Exchange Fleet Street, London. Makes, to the greatest Perfection, all sorts of Wind Musical Instruments. In Ivory or fine Wood; Plain, after a very neat manner or curiously Adorn’d with Gold, Silver, Ivory, & c. necessary to preserve Them; approv’d and recommended by the best Masters in Europe. Sold as above, and no where else. N:B; Whereas Instruments are sold about Town pretended to be made by Persons who have work’d under my Father or Me, which is an Imposition on the Publick, for my Father, or Self, never taught, or employ’d any other Person, in the finishing part of any Instrument whatsoever. The Mark Stanesby/Junior on my Work.”

(Please note the last part of the trade card: “N:B; Whereas Instruments are sold about Town pretended to be made by Persons who have work’d under my Father or Me, which is an Imposition on the Publick, for my Father, or Self, never taught, or employ’d any other Person, in the finishing part of any Instrument whatsoever. The Mark Stanesby/Junior on my Work.”)

This states that there are PERSONS going around SAYING that they WORKED for the Stamesby’s, NOT making counterfeit Stamesbys. Stanesby Jr states that his work is stamped Stanesby Jr, thus it is original!)

Much has been written on the Stanesby’s, both father (Thomas Sr) and Son( (Thomas Jr.). They were well respected instrument makers during the period from 1691-1756. Most notable are their recorders and flutes, although they many types of woodwind instrument. So respected were their work that even today model makers make reproductions after the original Stanesby models. As with Stradivarius, the models are named after the patterns used by the Stanesby’s.

The reasoning of this is: “The fife was for a long time laid aside, and was not restored till about the year 1745, when the Duke of Cumberland introduced it into the guards: it was not however adopted into the marching regiments till 1747.”

Also, others in England were making and advertising fifes at the same time: Here is an advertisement from 1765 in the Gazetteer and New Daily Advertiser. (London) “John Mason, Wind Musical Instrument Maker, assures the Public, he has been Fife-maker to his Majesty’s three Regiments of Guards these 18 years…..” Thus, 1765-18 years is 1747, showing that others in the trade were producing fifes for the Army and the public.

Diameter of Instrument: .869 in

Wood: Appears to be Boxwood

Swell: A little before the embouchure hole.

The interesting part of the ferrules is how they are attached: using a small holes in the brass, small pins are inserted to keep the ferrule in place.

Note; On the top ferrule is scratched the following: IxCAD 1808 and an anchor. On the bottom ferrule is only an anchor. These, most likely, were put there by a previous owner of the instrument. Whether the instrument was used in the British Navy during this time is not known.